I did the Vagina Monologues all four years of undergrad, and it was one of the best experiences of my life. It’s a great introduction to structured grassroots activism campaigns, and all the trends of taking back words (slut, cunt, dyke, etc.) owe their roots to Eve Ensler’s courageous first step. The Vagina Monologues recently turned 10, and there were some discussions that it was out of date, mostly by people who hadn’t seen it. While some pieces have aged better than others, I think it’s still hilarious, moving, and relevant overall. Some very strong pieces have been added in recent years, such as “They Beat the Girl out of my Boy,” about being transgender. And the expansion of Eve’s work into the third world has been called colonialist, but I just call it an effective way to get privileged college kids to put money and time toward righting injustices. That being said, it’s a fuckton of work to put on and do well. In my four years with V-Day, I did just about every part of putting on the show – acting, producing, being on the promotional team, and finally directing. I experienced definite highs and lows, great moments of sisterhood and unbelievable cattiness. Regardless of personal dynamics, you still have to engage people in spending a ton of time, both in rehearsal and in promoting the show, so that you fill the seats and make money for your chosen charities. The Vagina Monologues absolutely turned me into a feminist, but there were times where I saw what those gender stereotypes were getting at.

Stereotype: Most women are at least a little bit gay

I have no idea why they cast me. Despite having had a laughable amount of boring straight sex by that time, I was repressed. I didn’t masturbate. I picked an audition piece that talked about vaginas as flowers rather than cunts. But, I did a lot of theater at the time, a.k.a. I did a lot of unsuccessful auditions. V-Day cast me as an ensemble member in “The Workshop,” possibly the most dated of the monologues – it’s the one about the group sessions of looking at vaginas with hand mirrors. I have not, to this day, actually done that.  I’ve seen a lot more vaginas since then, though.

I met my first lesbians and bisexuals in The Vagina Monologues. They were gorgeous and sophisticated, had visible tattoos and backstage lover’s quarrels. They had whole monologues to themselves, because they were clearly more comfortable with vaginas than I was.

But it got better. I met the woman who was to become one of my best friends, who showed me the hook suspensions she did for fun and made me aware of just how boring the sex I was having was. I soaked up everyone’s lines without trying, and when the gorgeous lesbian couple inevitably broke up and one of them quit the show, I was chosen as her understudy. This meant I was now playing a homeless Southern black lesbian who had been sexually assaulted numerous times as a child, even FURTHER from my actual experience. That’s why it’s called acting, I guess? I do think that developing empathy for people whose experiences differ from ours is an important part of being a feminist, even if the casting was a little desperate.

I didn’t actually get around to dating any of my cast mates until my senior year, but the Vagina Monologues definitely opened me up to the possibility of being bisexual. Studies say that men’s sexuality is more hard-wired, whereas women tend to be more fluid, either identifying as different things at different points in their lives, or being more likely to be bisexual. If I had grown up in Puritan New England, I probably wouldn’t have identified as bisexual, but being surrounded by gorgeous, confident, queer women… well, I wanted some of that.

By the end of the year, my favorite piece was “the Woman who Loved to Make other Women Moan.” I think that tells you something.

Stereotype: Causes must be “sexy”

I may have had the world’s weakest “study abroad” year, at a Canadian university driving distance from my parent’s house, but I probably wouldn’t have gotten to work with a fantastic V-Team if I had studied in, say, China. Our team, the “Pussy Posse,” was in charge of promoting the show. It was mixed gender, all sizes, creative, and fun. We had almost nothing to do with the production, which I think had the average production problems. Instead, we got to host open mic fundraisers, disrupt people’s classes to invite them to the show, table at packed student fairs, design and sell merch, and dance around the student union in a vagina costume handing out vagina cookies. It was all very silly, but we also sold the show on the basis of sex and shock value. Our t-shirts had slogans like “vaginas are coming” and “Vagitarian” (think about it…). There’s a photo of three of us on the promotional materials biting into vagina cookies with a come-hither look. We dressed the actresses up in draped fabric and body paint for a photo shoot, and in the show a lot of the cast femme’d it up in corsets and heels. “I’m hot and potentially sexually available,” we were saying with our body language, “don’t you want to listen to what I have to say?” In retrospect, that may not have been the most effective recruiting tool for radical feminism. The show is so much more than the sexy pieces, but it’s also been accused of being anti-male. Throughout my four years with V-Day, we were always trying to fight the man hating image, often by being sexy and cute and using titillating language. But in doing that we probably lost a lot of opportunities for calling out oppression and welcoming people of all body types. 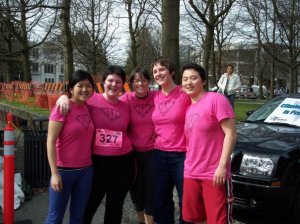 Stereotype: Women can be real bitches to each other.

I REALLY wanted to direct my senior year, but due to my year in Canada I missed applications and was designated Assistant Director and Producer, aka the person who knows what’s up. They gave me the opening piece, I picked a competent actress, set clear expectations, and let her run with her artistic choices. It’s a good thing my directing piece was so simple, because the rest of the cast was falling apart. The two other directors were sorority girls who had acted several years in a row, a no-no in V-Day culture – you’re supposed to step aside and give other folks the opportunity. From the get-go I didn’t feel like they had a good handle on the process. They certainly had staging ideas, but they mostly involved sexy dancing, and after 3 years of staging the same piece nothing really stood out as new to me. They let some actors slack, and came down like a ton of bricks on others. They scheduled all-day rehearsals and didn’t make good use of people’s time. My role became talking our cast members out of quitting, and it was only my love of the movement and wanting to preserve its reputation that kept me around.  It all seemed so unnecessary. It’s a simple show; we’re not even technically allowed to stage it. It’s supposed to be read off cards, reader’s theater style. After 3 years of building great friendships, it was really disappointing to see show’s detractors proven right, that when you get a group of women together they will be unnecessarily catty and terrible to each other.

Or maybe it was just those bitches. I heard that the next year one of them appointed herself director again, even though she had graduated. It was probably time for me to cut ties with V-Day, anyway.  I learned and grew and kissed my first girl, and that’s what college activist theater is supposed to do.

But if I had a chance to talk to Eve Ensler, here’s what I’d say:

Eve. I know you’ve reclaimed Cunt and all, and that’s great, but I’d like to re-reclaim it. I think we have plenty of words for the vagina now, and not enough words for people who are making your life so difficult you want to scream. Maybe we can share?