I’ve been spending a lot of time commuting on the metro lately.  Generally, I spend the uninterrupted 35 minutes below ground reading and thinking quietly to myself, not interacting with the world around me.  Generally, my ride is predictable–I weave seamlessly through the crowds, try to find a seat, avoid eye contact, and I’m set.  Recently, I was transferring lines and was figuratively hit in the face by bright orange advertising where I was expecting gray. 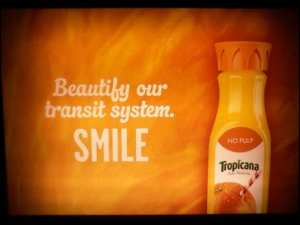 After some careful consideration, I decided not to take it as personally targeted to me as a woman.  I could have taken issue with it–the ad has nothing to do with Tropicana’s slogan (Have a Tropicana Morning), has nothing to do with orange juice, and has no place in the metro where food and drink are prohibited.  But I wanted to let it go, rather than let it bother me twice a day as I pass it.  After all, nothing they said was explicitly gendered.  Maybe they didn’t mean it the way women are often told to smile.

Unfortunately, not long after this ad campaign went up, I was surprised on the metro again.  I saw this picture over another rider’s shoulder, and I got angry. 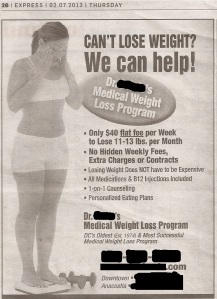 (Picture contains a woman in underclothes standing on a scale and looking upset at the number there.  Prominent text reads “Can’t lose weight? We can help!”)

My first thought was one of confusion—“Wait, she’s a perfectly normal woman!  What help does she need losing weight?”   I groaned and found a nearby copy of the commuter newspaper to have a closer look.  This ad was clearly targeted at me, a woman (of similar build to the model).  I could not ignore this one.  I’m going to point out a few things about it that bother me.

“Can’t lose weight?”  The question implies that the model has been trying to lose weight naturally, through diet and exercise, but has failed to reach her weight goal.  This ad is telling you that if you are exercising, eating healthy foods, and “can’t” lose weight you need to inject yourself with vitamins (“B12 injections included!”) and pay $40/week to do it.*

What if there was a reason this woman couldn’t lose weight that had nothing to do with set point theory**, diet, or exercise regimens?  Would this company welcome someone with medical reasons to worry about uncontrollable weight gain?  Is this “Dr.” inviting people who can’t lose weight because of a gland problem, a hormonal imbalance, depression, or some mysterious undiagnosed disease? Would the “Dr.” try to fix a real medical cause of concern, or only the aesthetic one?

Even if the “Dr.” did address those concerns, this advertisement is not trying to get people with those concerns through their doors.  It is trying to make women feel that we should be trying at all times to lose weight, and that there is something wrong with us if we can’t.  This ad is conflating weightloss with health, and it sickens me.

At a certain point while looking more intently at the page, I noticed what was beneath this ad.  The page looks a little more like this:

(An ad directly below “Can’t lose weight” for National Geographic features an elephant.  The model’s sightline appears to track to the elephant far below her.)

I have enough to be anxious about in my life without being reminded of my high school (okay college too) body insecurities.  The model, obviously not obese, is gasping or screaming in dismay at the scale, and apparently pictures herself as an elephant.  She’s not dismayed by a blood test saying she has high cholesterol.  She’s not worried because she’s short of breath.  She’s not even upset because her old jeans don’t fit.  She’s fixated on the scale.  Her nails are manicured, toes pedicured, eyebrows shaped.  She has highlights.  She’s wearing eyeshadow.  Her clothes are clean.  She exercises.  She’s doing everything “right”, in trying to present a good face to society, but is so obsessed with her weight that she is going to shell out $160 a month on weightloss treatment to appear perfect, because anything less than that is horrifying.

She’s attractive by conventional standards.  It’s making me conscious of the way I view heavier people, that one of the things that bothers me is that the ad uses a picture of a “normal” sized woman to exemplify someone who needs to lose weight.  But her dysmorphia feeds a social stigma against those bigger than her as well.

I am well aware that this is not the first bit of advertising to take advantage of the fact that a woman is valued socially primarily for her looks.  It’s still worth talking about.  This ad layout reinforces that women of all sizes should be ashamed and afraid of their bodies.  Ashamed to wear that pair of jeans that’s so comfortable because of the muffin-top it creates.  Afraid that if she’s too big, she will be the butt of jokes, excluded from her social circle, and ultimately she will be undeserving of love. This ad layout says that no matter how healthy a woman is, if she doesn’t find the perfect number on the scales, she should consider herself an elephant. That exact message may have been an accident in ad placement, but I wouldn’t be surprised if some editor had seen it, laughed, and said to leave it there.

I have no problem with the fact that being slender is held up as being wonderful right now.  It’s been observed scientifically that “in cultures with scarce resources, heavier women are preferred, whereas in cultures with abundant resources, thinner women are preferred.”  The problem comes when society crams the message “thin is in” into every part of a woman’s identity.  When an intelligent, brave, caring woman (read: close friend of mine) is brainwashed by a society that creates ads like this one to believe that she occupies too much space in the world–both physically and with her opinions–to the point of being unable to eat enough food to have the minimal physical energy to stand, you know that something’s wrong with this picture.  Let’s not ignore this one.

Bonus image: on the same page, right next to the elephant, is a section of “today in history…” 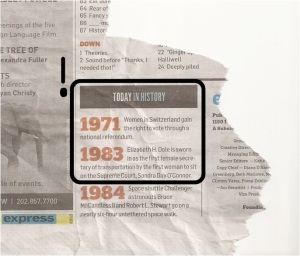 (“1971: Women in Switzerland gain the right to vote through a national referendum. 1983: Elizabeth H. Dole is sworn in as the first female secretary of transportation by the first woman to sit on the Supreme Court, Sandra Day O’Connor. 1984: Space shuttle Challenger astronauts Bruce McCandless II and Robert L. Stewart go on a nearly six-hour untethered space walk.”)

*I must admit, I was pleased to see that the weight loss they promise is on the high end of reasonable–if you’re sensible about it and have no other underlying medical problems, healthy and sustainable weight loss can be up to 2-3lbs a week.  Realizing I know that figure off the top of my head?  Not so pleasant.
**There are many opinions on set point theory.

1 thought on “Something’s Wrong with this Picture”