I was born to be a scientist.

From a young age, I wanted to discover, understand, and change the world. I picked up turtles to examine the patterns on their shells, and drew giant Pascal triangles on graph paper. By the time I was 10, I knew two computer languages. Sadly, I was the only girl at the computer science camp I went to the summer after fifth grade, and I felt left out and belittled by the boys. The experience pushed me out of a scientific discipline I loved. But I didn’t give up the dream, instead pursuing a career in biology.

According to the National Science Foundation, 41% of men and 30% of women in their first year of college plan to major in science or engineering. In 2007, 150,000 men earned bachelor’s degrees in science, technology, engineering, and mathematics (STEM) while only 90,000 women earned degrees in these fields. This is already an unacceptable gender gap, but it gets worse at the highest level of science academia, the tenured faculty position. At Harvard, there are 149 men with tenured professorships in the natural sciences and only 13 women. This disparity is typical in natural science, and even worse in engineering and computer science. And that’s not even factoring in how bleak the picture gets when we look at representation of women of color.

Proportion of women and men in physics at different stages of the academic ladder.

Women face barriers to a career in science at every step of the academic ladder. As children, girls are socialized to believe that they are bad at math and science. In kindergarten, boys and girls are equally interested in science of all disciplines, but by the time they’re nine they start to believe that boys are more suited to science than girls. Students rate their female science teachers worse than their male science teachers, even when the teachers of both sexes are equally effective. Parents are three times more likely to explain exhibits at a science museum to their sons than to their daughters. When girls are told before a test that boys and girls are equally skilled at math and science, any gender gap in scores in these subjects disappears. Girls judge their own mathematical abilities more harshly than boys, regardless of how skilled they are, which often causes them to drop out of an academic path in a STEM field. Science faculty are more likely to take on male students than female, even when students of both genders have identical skill and experience. 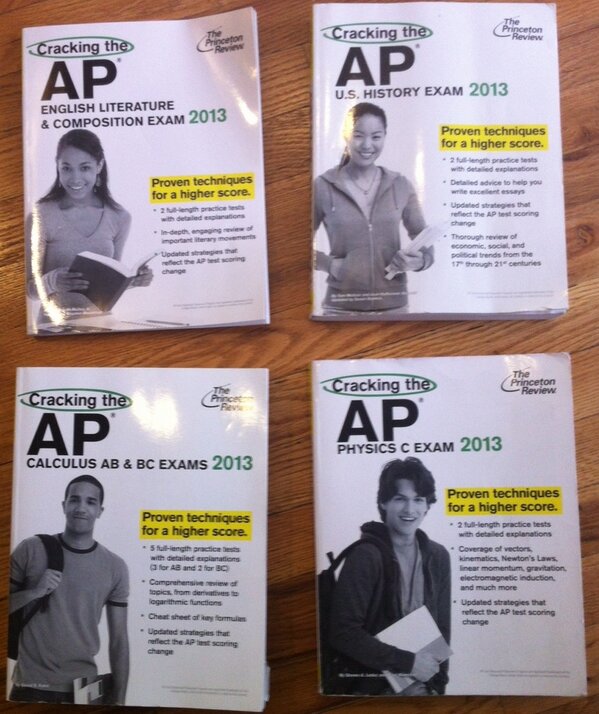 According to the covers of these books, women study history and literature while men study calculus and physics.

Overall, the evidence suggests that the gender disparity in science is because of bias against women, not because men are “naturally” better at science (take that, Larry Summers!) Yet the myth of an inalterable biological advantage that men have over women in science and math persists.

Folks, you should all be as angry about this as I am. Not only is it inherently unfair that women are pushed out of science, but it makes me particularly sad because science is so cool. What I love about being a scientist is that science helps us understand our world at the most fundamental level. Theories such as the Big Bang, evolution, gravity, and plate tectonics shape the way we view life, our planet, and the very structure of the universe. Women need to participate in this process of discovery.

In her famous essay “A Room of One’s Own,” Virginia Woolf invites us to imagine what Shakespeare’s sister, the equal of his genius, might have written in secret, and then burned in the fireplace because women weren’t supposed to tell their own stories. I invite you all to imagine what great scientific discoveries Galileo’s sister might have made, but never shared with anyone, because natural philosophy was the domain of men. I ask you to imagine what a talented girl who stops taking computer science courses because of the misogynistic “hacker culture” might have created. Maybe she would have cracked the secrets of quantum computing, and started a scientific revolution.

But there’s even more to the picture than that. We need more women in science because sexist science is bad science. The ideal scientific mindset is that of a completely unbiased observer. The more open-minded you are, and the more possibilities you can imagine, the more likely you are to come up with new hypotheses and discover scientific truth. A scientist must question everything, and leave no assumption unturned. Of course, there’s no such thing as a completely unbiased observer. But the greater the diversity of viewpoints we achieve in science, the more likely we are to question one another’s biases and blind spots – and discover the fundamental laws that underpin the way the world works.

If you want an example of the ways in which bias leads to bad science, we need look no further than Charles Darwin’s Sexual Selection and the Descent of Man. This follow-up to his seminal work on evolution, On the Origin of Species, contains many important insights. But it also makes biased claims that are not only blatantly wrong, but poisoned science with bad ideas that still persist today.

Woman seems to differ from man in mental disposition, chiefly in her greater tenderness and less selfishness; and this holds good even with savages […] Some, at least, of these faculties [that are strongest in women] are characteristic of the lower races, and therefore of a past and lower state of civilization. (pp. 326-327)

Wow, the sexist and racist double whammy! The scientific flaws in this excerpt are too numerous to list, but right now I’ll point out that there is no such thing as “lower” or “primitive” or “less developed” as far as evolution is concerned. If a trait is simple or undeveloped in an organism, that generally means that the organism doesn’t really need that trait. An earthworm doesn’t have legs because it doesn’t need legs. Therefore, that organism is perfectly well-developed for what it does. Nature knows no hierarchy. Yet this idea of some life-forms being “primitive” or “lower” has infected popular thinking about evolution, and led to a lot of disgustingly racist and classist ideology, such as social Darwinism.

But to me, what is most remarkable about the gender bias in Darwin’s second great work is how it applies to animal behavior. Animals don’t know or care about human ideas of gender roles, yet scientists habitually project human gender biases onto the sexual behavior of animals. Darwin believed that when it came to sex, males initiated and females resisted, writing “that males of all mammals eagerly pursue the females is notorious to every one” while “the female, on the other hand, with the rarest exceptions…is coy, and may often be seen endeavoring for a long time to escape from the male.”

Darwin’s ideas provided the template for scientific thinking on sexual behavior for years. Many venerable theories on sexual selection and reproductive investment, such as the Bateman principle and the Trivers-Willard hypothesis, have been based on his ideas. There’s just one problem: he was completely, disastrously wrong. Observations of mating behavior in females in groups as wide-ranging as insects, mammals, birds, frogs, and fish – as well as extensive genetic paternity testing – reveal that females actively pursue sex. In fact, faithfulness to one male partner is the exception rather than the norm among females. At the same time, males often don’t pursue females with indiscriminate eagerness; they, too, can be choosy when it comes to their mates.

Animal behavior research is still in the midst of a revolution, coming up with new theories to replace Darwin’s outdated ideas about sexual behavior. Women scientists are at the forefront of this new wave. Sarah Hrdy shared detailed accounts of female primates actively soliciting sex from males and females. Patricia Gowaty did experiments challenging the notion that males are more sexually competitive than females. Mary Jane West-Eberhard proposed the idea of “social selection,” a concept of competition over reproduction that includes not just mating, but other resources relating to reproduction that are hotly contested among females, such as quality nesting sites. In other words, women scientists are doing the hard work of examining Darwin’s ideas from a whole new perspective. Every scientific field needs smart, hard-working women like them.

You may be wondering what you can do about the gender disparity in science. If you’re a woman scientist, be loud and be proud! Get published, give talks, and don’t let the Man get you down. If you’re a man in a STEM field, try bolstering the self-confidence of your female colleagues and students. If you’re not in a STEM field, educate yourself about female scientists and their contributions (I recommend Ada Lovelace, Marie Curie, Rosalind Franklin, Barbara McClintock, and Lisa Randall.) Also, promote, write, and celebrate portrayals of fictional women scientists in media! These are great role models for everyone. (I’m particularly fond of Toshiko Sato in Torchwood and Mary Malone in His Dark Materials.)

In my next post, I’ll delve into more concrete examples of how gender bias can blind us to important avenues of scientific exploration.

10 thoughts on “Gender Bias in Science, part I: Galileo’s Sister”