April is, among many other things, Autism Awareness/Autism Acceptance Month. While I don’t know anyone with full blown autism, I am close to a couple of people who exhibit the traits of Asperger’s Syndrome, a disorder on the autism spectrum, including someone I am in a romantic relationship with. He isn’t diagnosed, other than via the Internet; he’s extremely smart and charming, but adapting to his habits has been frustrating. My search for resources to understand him better led me to a very funny and relevant book called “The Journal of Best Practices: A Memoir of Marriage, Asperger Syndrome, and One Man’s Quest to Be a Better Husband” by David Finch.

I saw constant echoes of my own relationship playing out in the one David describes with his wife Kristen, a therapist who helps David discover his diagnosis. David is particular about his routines, but can’t incorporate the responsibilities of being a father and husband into them. He’s obsessive and compulsive about his own hygiene, but oblivious to the fact that he’s leaving his wife to run the household. He has learned when to play the role of Outgoing Man when socializing, but has no idea how hard it is for his family to bear the full brunt of his private neuroses. The inspiring thing about the book is that he does eventually wake up to what is missing, when his marriage is on the verge of collapse, and takes endearingly obsessive steps to learn how to behave better.

In my research on autism for this post, I noticed that the Autism Society calls April Awareness month and the Autism Self-Advocacy Network calls it Acceptance Month, reflecting different advocacy tactics and goals. The goal of Autism Acceptance Month is to spread acceptance of people with autism AS THEY ARE, without trying to cure them of their autistic traits. Part of me is like “Woo hoo, radical acceptance movement!” I can totally accept that autism may not be a disability or a disease at all, just a different way of functioning that our society doesn’t happen to be set up to support very well. According to the National Institute for Mental Health, 1 in 5 Americans has some degree of mental illness — and it’s certainly not the first time we’ve pathologized difference (see: being gay before 1973). If my boyfriend is behaving non-neurotypically in a way that doesn’t work for me, does that automatically make him wrong? But part of me struggles to accept my boyfriend’s autistic traits, and wishes that he would work on understanding how they impact me. Self-involvement, obsession, inflexibility, and lack of empathy make it really hard for me to rely on a person with autistic tendencies for emotional support. As a feminist, it doesn’t feel good to stay in an unhappy, textbook gender stereotypical relationship. Finch’s book is a good model. At the same time that he has a personal incentive to eliminate his autistic traits, his family grows in their acceptance of him as an autistic person and develops compromises that fits his routines. 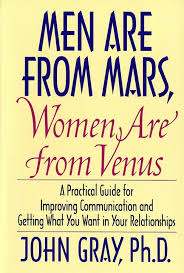 The weird thing is, I was reading “Men are from Mars, Women are from Venus” at the same time, trying to get to the bottom of my relationship issues, and my boyfriend fit the man profile perfectly there too. Tries to “fix” your problems rather than listening and empathizing? Check. Retreats into cave under stress? Check. Feels like big expressions of love once in a while are worth more than small, frequent reminders of caring? Yep. It’s almost like the archetype of a man in a relationship is a slightly autistic guy with barriers to understanding social interactions. (FWIW, I fit the woman profile, too: likes to talk out problems and be reassured and supported, etc.) The science behind “Men are from Mars” is, of course, nonexistent, but it struck enough of a chord to sell seven million copies and spawn “infomercials, audiotapes and videotapes, weekend seminars, theme vacations, a one-man Broadway show, a French stage show, a TV sitcom plus a proposed movie topic with 20th Century Fox.” (Wikipedia) In the book, everything ends in sunshine and rainbows, where both genders learn about their different coping mechanisms and compromise for each other. It’s just hard to tell, in an actual relationship, who is compromising how much. For me, this dynamic directly pits the marginalization of me as a woman against the marginalization of him as a disabled person. I have no good answers to this conundrum. Right now I’m just sucking it up and keeping everything in the apartment at right angles.

What you can do: Learn more about autism from both advocacy groups!