As I have been writing about, kink communities have a lot of problems with abuse, and a culture that has mirrored, rather than rejected, mainstream rape culture. So what can we do? Making kink communities safer starts, in part, with making our spaces safer. Over the years of attending and hosting parties, and talking with other consent activists and friends, I’ve developed a number of theories about how to make play parties better and safer. So last week, I decided to put all those ideas into practice in a very intentional way when my group house threw a play party. In this post, I’m going to talk about what we did, why we did it, how it turned out, and what we want to do differently next time.

I think there are lessons from this post are applicable to people who aren’t kinksters, too! Lots of spaces have problem with boundary violations. Dance scenes, for example. And while many details differ, I think some of techniques may be applicable (such as posting rules on the wall, and clearly designating support people).

What We Did, and Why

The Vision: Enthusiastic Consent + No Creepers

As I said in Part II, we need to make our spaces and communities unsafe spaces for predators and abusers, because only then can they be safe spaces for everyone else. So we made it very clear in the party invite, through posters on the wall, and through verbal announcements, that we were serious about boundaries, and that people who didn’t respect that would be unwelcome. To quote from our invite emails and wall signs (link added):

We are committed to building a safer public kink scene. Accordingly, we reserve the right to deny admission to, or eject from the party, anyone who violates consent or house rules and norms, or for general skeeviness.

To quote a friend who put it well, “We are aware that ‘skeeviness’ is a very subjective standard. We are comfortable with that. Skeeviness does not correlate with any particular identity; rather, we determine it according to Supreme Court Justice Potter Stewart’s standard for determining obscenity as laid out in Jacobellis v. Ohio, 378 U.S. 184, 1964.”*

No, we didn’t end up having to kick anyone out. But we were prepared to put our foot down on this. Now, we were very careful with the invite list in the first place. We invited people we knew and required them to get approval from us to invite friends and lovers—we approved the guests in every case but this gave us the option to say no. We ended up with ~35 attendees this time around, but the house could probably hold even more.

Of course, such a selective invite system isn’t practical for truly public parties. For such parties, it is useful to have a PAL/Buddy system—where you have to come with a friend, and if either of you fuck up, you both have to leave. We didn’t institute such a system for this party, but might in the future.

I’ve written extensively about safer sex already on this blog. So naturally we provided tons of safer sex supplies in every room:

Dungeon Monitors (DMs) are key for making a play space safe. The primary job of a DM is to watch out for violations of house rules and/or consent. Violations of boundaries are much harder to see, however, because you often can’t know what people negotiated prior to their scene. Therefore the other main purpose of the DMs is to be a resource for people to talk to about things that happened to them, concerns they have, or if they need emotional support for any reason. In practice, the DMs also ended up serving as assistants, grabbing lube, safer sex supplies, chucks, etc.

Throughout the night, we had two people on dungeon monitor duty at all times, with one-hour shifts. The DM crew was made up of all the housemates plus a carefully selected group of friends who I trusted. The DMs had clear identifiers when they were on duty—we used straw hats—and the DM schedule (times and names) was posted on the wall.

Is it excessive to have two DMs at all times for a house party? No, I don’t think so. Here’s why:

It’s crucial to be prepared. I highly recommend anyone wanting to throw a play party check out Jay Wiseman’s Toybag Guide to Dungeon Emergencies and Supplies, and prep accordingly. We did a brief DM training prior to the party, but I wish I’d had the time and expertise to be much more thorough.

The Writing on the Wall

Parties need clear rules that will be universally enforced and that no one can claim they don’t know. We sent the rules out by email to all attendees prior to the party AND posted them clearly in the play space on the wall. What’s more, we actually had a formal welcome with announcements, where I verbally reviewed all the rules with all guests. 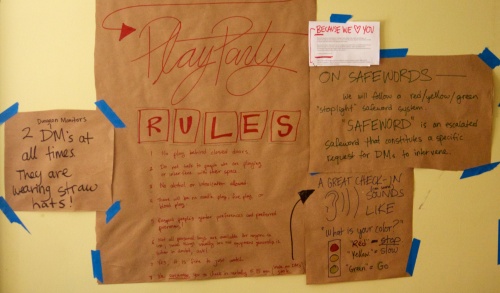 Some of the signs on the wall for our our party (Click for larger image; the blurry text on white paper is the passage about skeeviness quoted above, with the words “Because We ❤ You” added).

As is often the case, we had clear “house safewords.”

Other rules we had included:

A Note on Alcohol

Having a large house, we were able to define a number of clear spaces, which worked very well. We swapped out bright lights for dimmer red or blue colored lights in most rooms. Of particular note:

We had a board where people could list things they wanted to do, either as a giver, receiver, or N/A. The board was instrumental in facilitating some of the real highlights of the night!

We also used the party as an opportunity to raise awareness and support for The Garden, a local sex-positive, body-positive, queer-women-owned sexuality resource center and toy shop being launched in DC. They do cool workshops and sell nice things too; check them out!

As I’ve said, we had a formal welcome where I talked about the vision for the party, the role of the DMs, and the house rules. I had planned to do an icebreaker / demo activity too, but we were behind schedule (more on that below), so there wasn’t time. This did create more structure to the event, but it gave us an opportunity to set the tone, emphasize the importance of consent, and ensure everyone knew the rules.

We then kicked things up a notch with a really badass pole dancing performance by one of our stellar guests.

So, how did it go? I’ve talked to a lot of attendees, and everyone seems to agree that the party was a pretty epic success. It definitely far exceeded any other play party I’ve thrown.

Highlights of the night:

Several guests had never been to a play party before, and told me they had a great time and felt very welcomed. I even got a handwritten thank you note!

Yet We Could Do Better

There are several areas where I feel we could have done better, and plan to improve on for next time:

First of all, the party started late, which meant some people didn’t end up staying as long as they would have liked, and also meant that I had to cut an exercise I’d planned to do during the introduction. I’d like to talk about it for a moment.

I think we need to de-escalate “no.” Asking needs to not be a big deal, and saying no needs to also not be a big deal. Because that “no” isn’t a rejection. It isn’t about the person who is being turned down. It’s all about the person who is saying no, and the legitimacy of their choices! I went to a workshop at my first Dark Odyssey event where the facilitator did a really cool exercise, where everyone paired off, preferably with someone they didn’t know. Then they took turns, with each person asking if they could do a specific kinky activity, and the other person turning them down. It’s good practice. Every time you clearly state your desires, clearly stating your desires and asking for what you want gets easier. Every time you say no, saying no gets easier. Maybe I’ll get to do this at a future party?

I think we could have done more to get people to meet each other and get to know each other—many people did know each other, but some didn’t feel as included. But how to do this in an informal way is a challenge. The “I Want To…” board definitely helped in this regard, but some people forgot to put their names down, which made follow-up a challenge, to say the least.

In talking since, we think it would be cool to have had demonstrations on how to negotiate clearly, and on how to do specific activities, such as wax play, or caning, or pole dancing, etc. I think we bit off as much as we could chew this time, but it’s great material for future parties!

As I said earlier, this party was in many ways an experiment. And some things we changed even before it started: We originally were going to have a rule that said people were required to check in with the person/people they were playing with at least once every 15 minutes. It was a rule with good intentions for normalizing check-ins and re-affirmation of consent. In the end, we made it just something we strongly encouraged. In the most practical terms, we simply didn’t have enough clocks. But it wasn’t workable for other reasons too. For one thing, it was difficult-to-impossible to enforce, and if you have rules you know you can’t enforce, it weakens the seriousness of the others. It also conflicted with the rule to not interrupt people’s ongoing scenes. And it’s also problematic to dictate how people, especially if they are in a long-term relationships, can play.

We could have had better background music. We could have managed how we handled the door and collected donations better. I’d wanted to put up Midori’s excelent kink role definitions on the wall to help people negotiate, but forgot. Etc. Live and learn.

What Do You Think?

I certainly don’t have all the answers, or think I did everything perfectly. But overall I’m proud of the play party and hope that some of what we did can be a resource for other people planning or attending such parties. And not just party hosts, either! If you see something here you like, but that your local event isn’t doing, suggest it to them!

What do you think? What best practices have you seen at play parties that I haven’t discussed? How do you think this applies to dance parties or other non-sexual events? Discuss.

Kitty Stryker, “Safe/Ward: How to Encourage Consent Culture for Community Leaders,” Good Vibrations Magazine, 2011. (I just discovered this; it makes a number of the same recommendations and some additional points.)