How many bisexuals do you know? You know what? I bet you know more than you think! (Yes, even if you are yourself.) See, research shows that bisexuals make up a larger percentage of the total LGBT population than gays or lesbians! In June 2013, The Pew Research Center reported that bisexuals make up 40% of the total LGBT population, though they also found that many more women identified as bisexual than men–see graph at right.[1] And in 2010, a study published in the Journal of Sexual Medicine, found that among all American adults, 3.1% self-identified as bisexual, compared to 2.5% as gay/lesbian.[2] Yet bisexuals are surprisingly closeted! While over 70% of gay men and lesbians said they are out to most or all the important people in their life, only 28% of bisexuals are![3]

The invisibility of bisexuality has lots of negative impacts on the health and welfare of bisexual people. The San Francisco Human Rights Commission published one of the better studies on the subject in 2011, which found, among other things, that bisexual people experience greater likelihood of depression, poor health, and risky drinking than the broader population. These impacts are a result in part, of the pain of being not accepted. And that’s a pain I know well.

So why are bisexuals not visible? A lot of it has to do with biphobia, which drives people into the closet. Lucy took down a lot of these problematic myths, so I won’t repeat them all here. But I want to focus in particular on the problems we run into in the “performance” model we apply to sexual orientation. People are expected to “perform’ their sexual orientation by dating someone of the orientation they’re attracted to. And bisexuals by this model are assumed to need “one of each.” But this isn’t true!

There are many monogamous bisexuals, and many ethically non-monogamous ones as well–an individuals inclination towards polyamory or monogamy is completely separate from sexual orientation! In “Bisexuals and the Slut Myth,” Pepper Mint points out that this myth derives from the highly problematic assumption that “men and women are so different that desire for one is an entirely different beast from desire for the other. This assumption is sexist, as it is based in the false assumption that men and women are entirely different. It is also a defining feature of heterosexism.”

Like many bisexuals I know, I like people. Not men and women. (Indeed, the very word bisexual is controversial, with some people saying that it is transphobic because it affirms a gender binary. Personally, I disagree.[4] Though at the same time, I generally prefer the identity “queer” because it meshes more closely with politics…and my dislike of silos.)

Bisexuality is not a phase. It’s not some nascent larval stage of gayness. It’s my authentic self.

I’ve known I was bisexual almost as long as I’ve had a sexuality of any variety. Sure, my relative attraction to people of different genders has shifted around over time, and my dating habits certainly have, but I’ve always known I was queer. The first time a brought a girlfriend home, my father told me he was “glad I had a girlfriend, because it means you’re not gay.” Of course, he was missing the point! In the end, it took me three attempts over a number of years of coming out to my parents as bisexual/queer before it “stuck.” In college, I didn’t make a big deal about being bisexual because I felt that I wasn’t assumed to be straight in the first place at my hippie, sexually-progressive, and generally open-minded college. But then when I went out into the “real” world and grad school, all while dating my long-term girlfriend, I was, unsurprisingly, taken to be “straight.” And my parents soon forgot that I’d mentioned being bisexual. In “Covering: The Hidden Assult on our Civil Rights,” Kenji Yoshino argues that we all experience presure to “cover” and minimize those attributes that are not normative. We all do it. But we shouldn’t have to. Sometimes covering makes sense. But over time, having part of your identity ignored or minimized takes a toll. Being constantly taken as straight just plain hurt. It hurt to not be seen for who I was, to benefit so much from straight privilege I didn’t even want to have!

So what does it mean to be visible as a bisexual? How does that even work? There aren’t really good models for what bisexuality looks like–especiallymale bisexuality. So I think we’re all kind of making it up as we go along. People often “read” others’ sexuality from their gender presentation–even though, just like relationship orientation, gender and sexuality are also completely separate concepts. Or mostly. I think I do feel a little more comfortable in my own skin because I’m not worried that people will think I’m not straight. There’s also the language we use. The things we know about, and how we self-define, to our friends to our family, and at work. And of course, the people we talk about. And the people we are visibly affectionate with, whose hands we hold, whose lips we kiss. And yet this introduces its own complications…

Being out as bisexual is both easier and more complicated for me these days. Easier because I do in fact have both male and female partners, and so most people in my friend network either see me “acting” bisexually, or hear me talking about my girlfriend and my boyfriend. But it trickier to be out about being bi without talking about my not-so-normative relationship structure. And I don’t want to reiforce people’s stereotypes.

Which brings us back to talking. I’ve learned the hard way that this ain’t easy. Despite the growing acceptance of LGBTQ identities, most people (gay and straight) do not understand bisexuality. So it helps to explain. And be really patient. Remember my parents, and how I came out to them three times? The reason it finally stuck is I decided to sit down and explain it and answer all their questions, instead of trying to treat it like no big deal. Which meant devoting two hours to explaining bisexuality to each parent and stepparent–a total of eight hours! And that’s not to mention all the time spent revisiting it since. But the act of explaining, the act of being visible and proud, is useful. People tend to react to shame like sharks react to blood in the water. If you act like there’s something to hide, people will naturally think you have something to hide! Being unafraid is harder, but in the end far more satisfying.

In the introduction to a great new comic anthology on bisexuality, “Anything That Loves,” editor Charles ‘Zan’ Christensen asks, “could repression of same sex attraction by bisexual people be the major contributor to the myth that gay people can ‘choose’ heterosexuality?” I think maybe. I think that one of the reasons that a lot of gay and lesbian people don’t like bisexuality is that it almost unavoidably reintroduces “choice” into the discussion. For low- or high-Kinsey-number bisexuals, who are are “mostly” attracted to one gender, it may be possible to “choose” to be straight or gay, respectively. And any monogamously-inclined bisexual person does end up choosing to perform only heterosexuality or homosexuality at a given time. Of course, their bisexual orientations and attractions don’t magically go away. To say someone is not bisexual because they’re only dating one gender is just as ridiculous as saying someone is asexual because they are single! (Hat tip to Erika Moen for this point!)

The LGBT movement has invested a lot in the “born this way” framework. But the problem with it is it carries a scent of shame. We say “don’t judge us; we’re born this way,” which implies that maybe we’d change it if we could.

But being queer ought to be a totally legitimate choice. Because being queer is awesome! Being yourself, and finding people who support you for who you are, is how things get better.

Harvey Milk called on gays and lesbians to “come out, come out wherever you are! Milk didn’t do this because he was unaware of the risks people faced for coming out. On the contrary, it’s because he was aware! People fear what they don’t know. Coming out can be uncomfortable. Especially if you do it alone…so finding community is important. But it turns the other into the familiar, the out-group into the in-group. And it gives people the opportunity to grow and love instead of hate.

One thing I’ve learned is that the moment you come out, and every time you come out, you become a resource for others. Embrace that. Because that education and exposure, person by person, is how things begin to change. That’s the power of visibility.

My  life is full of other bisexuals, and I see such a variety of what that looks like in practice in terms of their attractions, their relationships. It’s beautiful, and I wish more people could see it. There are still too many people are out there with bisexual attraction and afraid to discuss it, afraid to be open about it. How much less mistrusted and misunderstood would bisexuality be more people were visible and out? How much stronger, how much bigger would the queer movement be?

There is so much we could do. 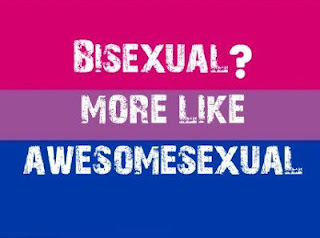 [4]On the word bisexual: Fabulous trans activist Julia Serrano wrote a great defense of the word bisexual, “Bisexuality does not reinforce the gender binary,” pointing out all the ways in which bisexuals and trans* people have long been allies, and the ways in which the term makes sense to her. Moreover, we need not even assume that the “bi” in bisexual refers to two genders in the first place. The Bisexual Index has a brilliant redefinition of this in their altogether excellent FAQ: they argue that “bi” refers to the two heterosexual and homosexual orientations, and if we then use a broader understanding of gender to define homosexual as “attracted to people of a broadly similar gender” and heterosexual “attracted to people of a broadly different gender,” then bisexual can refer to a whole spectrum instead of just “two” genders. While this borders on clever wordplay, I like it. And bisexual remains much easier to explain to most people than queer or some other even more esoteric term, like pansexual. Because take it from me, you don’t want your Mother asking if you have sex with goats.