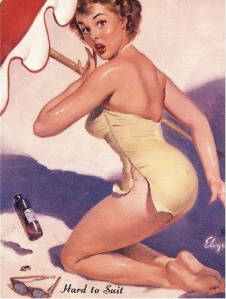 If you didn’t realize already, there’s going to be some NSFW language. This however, is as racy as the pictures get.

I’m going to go out on a limb and say something a little controversial: you should forget about them. I’m going to tell you why, but first, a little bit of back story:

I used to get performance anxiety. It’s a little weird to say that as a cis woman, seeing how that term is generally reserved for the bepenised folk, but it’s true. For a very long time, I couldn’t orgasm with a partner.

Rather than talk about it too much, I would instead put so much pressure on myself to orgasm that every time I would ever come close with a partner, I would nervously scrutinize every sensation I experienced. Unsurprisingly, that approach didn’t work so well. In the end, I just tried my best to redirect the action to focus on my partners and call it a day. In my eyes, I was defective. Clearly, there was something wrong with me.

Around my sixth or seventh partner, I noticed small changes in the (male and female) partners I found, but still not great. Finally, I met my current partner, heretofore known as Ladyfriend.

Suddenly, I started having orgasms. Not just one or two on occasion, but tons of them. I cried. It was amazing. All it took was one sentence:

It’s okay if you don’t orgasm, I just want to make you feel good.

The approach — focus on pleasure without worrying about where it’s going to end up — was entirely new to me. I know she wasn’t the first person to think this. I’m sure some of my later partners could have been on board for a pleasure-first approach, but Ladyfriend was the first person I met who acted that way from the outset.

In preparation for this piece, I asked Ladyfriend for her thoughts on sex and pleasure. She had a lot to say:

It’s also useful to note that Ladyfriend is a lesbian who has had sex with men before. So for her and many people figuring out their sexuality, sex wasn’t about orgasms, it was about proving something. ‘Yes, I can be straight. Yes, I can enjoy heterosexual sex.’ So for her, orgasms weren’t part of the equation during hetero sex, it was just about feeling good.

Orgasms were more of a ‘by myself’ activity…that definitely translated once I started having good partner sex.

Thinking back on my previous sexual experiences, so much of it was entirely goal-oriented, and understandably so. After all, a lot of the ideas we have about sex and pleasure are predominantly phallocentric: orgasms should be the end goal of sex because after the orgasm, sex is over (oh no! You lost your erection! We can’t have sex anymore!). Moreover, penetrative sex is typically seen as the culmination of sexual activity, despite the fact that very few women are able to achieve orgasm from penetration alone. In reality, there are lots of different types of sex, just like there are lots of different types of orgasms and ways to feel pleasure. As Bridie Marie put it so wonderfully in an email about this post: 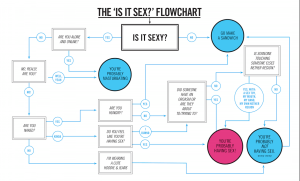 The Pervocracy has an amazing post on models of sex, whereby one of the most pervasive models is a competition model of sex. The competition model of sex posits that sex is about “showing off your prowess,” and a failure to do so would be an embarassment. Women’s and men’s magazines are one of the biggest culprits in perpetuating this model. Nerve has a recurring collection of ridiculous sex tips from Cosmo, Maxim, and other magazines. Point of the tips is less “how to make everyone feel awesome” and more “how to be a great lay so they don’t leave you for a superior partner.” 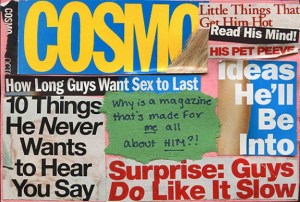 Romance novels and movies are just as much at fault. Let’s be real, how often do two lovers who barely know eachother “come together in a roar” without first talking very explicitly about what makes them do that? You hardly ever find romantic heroes experiencing a super awkward first sex scene, or having to work on what makes eachother feel good. Heroes and Heartbreakers says it perfectly:

For romance novels that follow the more popular route, the sexual compatibility is instant, often established during the first sex scene (if not the first instance of passionate eye contact), and is depicted as miraculous and inexplicable. The hero no longer feels attracted to any other woman. The heroine experiences sensations she’s never felt with another man.

Furthermore, romance novels and rom-coms reinforce the idea that sex is always tied to love. Even in casual sex comedies like Friends with Benefits or No Strings Attached, the protagonists are unable to have sex without eventually falling in love. Sex and love are great, but they aren’t always linked. Creating that false expectation sets people up for a lot of upset and disappointment.

Ultimately, I want people to see orgasms as a beginning, middle, end, and maybe-we’ll-get-there point. Strictly adhering to the “orgasms as sexual prowess and thereby value as a human being” model is inherently harmful. In real life, it takes time to figure out how to make a partner feel good, and a lot more factors go into it than just their attraction to you. Seeing orgasms as the be-all, end-all means that if your partner doesn’t orgasm, there’s something wrong with what you’re doing. Moreover, seeing sex and pleasure as driven by one specific activity is similarly limiting. People with all different types of bodies can enjoy sexual activities that have nothing to do with erections or P-in-V sex. By dismissing models of sex that don’t culminate in penetration and orgasms, you’re not just alienating people and stressing people out. You’re cheating them out of really awesome sex.

And that, my friends, is surely a crime.