Trust can mean a lot of things.  It can mean depending on someone to handle a responsibility or, in a more general sense, feeling warmly toward someone. For this post I’m going to use a more basic definition: the feeling of being able to predict someone else’s behavior if you know them well enough. Or to put it another way, a feeling that society operates by a knowable set of rules that won’t be violated.

“One plus one equals two. I can’t just stand by and let you think that one plus one might equal three, or four, or yellow.”

After my relationship with Ken, I lost that feeling.  If a classmate abruptly took a swing at me, I would be ready.  If my professor showed up to lecture in a clown suit, I would not be surprised.  It’s been almost four years since Ken’s final assault, and I have spent every day since then preparing.  Preparing my exit strategy in case my male therapist tries to rape me; preparing what I’ll do if the stranger on the subway pulls a knife; preparing how I will cope if I greet my friends one day and they randomly respond with rage.

For some of the assaults, I can pinpoint exactly what I did that made Ken angry.  One night his friends were joking with him, in front of me, about assaulting me.  Two of them were carrying rifles,[1] and it occurred to me that if they wanted to follow through with their “jokes,” there was nothing I could do.  The terror and absurdity snapped my composure and I started laughing-almost-crying.  Unfortunately, Ken thought I was laughing at him.  He listened to my explanation, that I only laughed because I was afraid, but he did not believe it.

So there were times where I could identify what I did, or what he thought I did.[2] But for most of them, we were having a normal day. One moment we were cuddling and the next I was fighting for my dignity, sometimes my life.  Often he would laugh at me.  Not a cruel laugh: the way he laughed at a funny TV show.

That broke my brain.  I experienced violence when I was younger, but it came only when the person was angry or in an altered state of mind.  Either way, their behavior was predictable. In that world, I could stay safe by avoiding actions that made them angry and by watching for certain signs.  I felt in control.  In a truly delusional sense, I believed that I could prevent others from hurting me as long as I was nice enough and followed the rules of staying “safe.”

In my world since Ken, people I know are more dangerous than strangers.[3] People I love can hurt me for entertainment. Warm laughter could mean violence. Consensual sex is one step away from rape, if my partner decides it is.  And I am acutely aware of having no control over that decision.  I can firmly express my preferences, but other people’s actions are entirely up to them, and being nice or cautious won’t change that.  It’s bone-chilling.

Pause for a PSA: if you constantly feel like nothing and no one in the world is safe, there’s a name for what you’re going through – hypervigilance – and you might benefit from therapy.  There are multiple treatments that can help you feel better or cope more effectively, whether your fear stems from anxiety or from traumatic stress, and a good therapist can help you figure out an approach that is right for you.

Working with someone has helped me start reaching out to my friends again.  I’m getting to the point where I can feel and display warmth toward other people while only fearing a violent reprisal, rather than expecting one.  But the most basic level of trust, a feeling of being able to predict the behavior of other people, a belief that friends and lovers will, for the most part, act with friendship and love – that’s still gone.  Therapy and all, I’m still afraid that it’s not coming back. 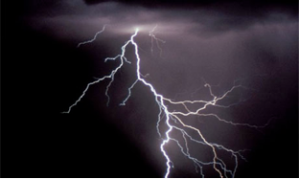 I found the silver lining! Now if I could just find shelter…

If nothing’s predictable, then who knows how things will turn out?  Maybe one day I will feel safe again. Maybe I won’t flinch when someone raises their hand to say hello. Maybe I will be able to display warmth toward my friends without being afraid that they will suddenly revile me.  Maybe I’ll trust someone enough to be alone with them, and for the things that might come after.  I would like that.

If you have pro-tips for getting there and/or you’re on a similar journey, I would love to hear your thoughts and experiences in the comments.  What does trust mean to you?  How do you have close relationships with people who have that scary free-will thing?

1. For reasons that would make sense if I explained, but it’s not relevant. Back
2. No matter what a person does, there is no justification for responding by raping them.  There is no law that requires you to rape someone when you’re angry.  There are other options.  I’ma write a post on this. Back
3. Two thirds of survivors of rape knew their attackers: 38 percent were attacked by a friend and 28 percent by an intimate partner. Back