April is Autism Awareness Month. Over the past few years, but particularly during the past month, I’ve been reading autobiographies of Autistic people.* I’d like to share them with you, so you can continue your awareness throughout the year(s). 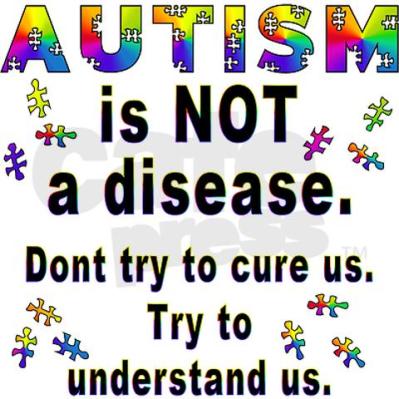 Text: “Autism is NOT a disease. Dont try to cure us. Try to understand us.” Click the pic for an introduction to Autism, complete with reading list.

Preface: Jan wrote about April and Autism last year, and makes a very good point about the naming of the month and the implications of that name. She wrote, “The Autism Society calls April Awareness Month and the Autism Self-Advocacy Network calls it Acceptance Month, reflecting different advocacy tactics and goals. The goal of Autism Acceptance Month is to spread acceptance of people with autism AS THEY ARE, without trying to cure them of their autistic traits.” So chew on that distinction for a bit while picking out a book to read.

One theme ran through all the works below: the challenges of understanding and being understood by other humans. Because it is so hard to communicate, I think it’s important that non-Autistics try to understand Autistics. Not only does reading works by Autistic authors help further relationships between those two groups, but it also gives insight into radically different ways of thinking that help the reader understand the world better. Y’know, like how to improve your dog’s quality of life. Or how to regulate your own emotions. Or the importance of the objects around you. Or, or, or…

Hopefully this brief list has inspired you to find one these books in your local library so you can get a better understanding of the folks we live with.  If you need more options, here are links two to many engaging hours of reading ahead.

*This is a two part footnote: 1) Almost all of these books are written by folks on the Asperger’s end of the Autism Spectrum. 2) I will be using “Autistic person” rather than “person with autism” for a whole lot of reasons that can be found in following interesting link on identity first rather than person first language.