I am a freak of nature:  I am an American woman who actually feels satisfied with her body. And its not like I’ve really “worked” on having positive body-image either. I have always felt more-or-less satisfied with my body. In fact, I am so incredibly not-concerned with my body, that I typically don’t think about it at all! But recently I HAVE started thinking about the phenomenon of my positive body-image. Mainly I’ve been thinking: “ How the fuck did that happen?”

I feel like I developed positive body-image naturally, but my journey to loving my body was probably as “natural” as 80 to 97 percent of young womens’ journeys to hating theirs.

So how did I get to be this way?  When I stop to think about it, there were about three major factors that played into my ability to “naturally” learn to love my body, all involving messages I received in my childhood and early adulthood.

From a young age, I got constant messaging from adults not only that mainstream media beauty standards were unrealistic, but that they were intentionally designed as such to make women feel insecure and thus spend lotza money trying to “get” that impossible body.

But, as I mentioned before, most Americans are well-aware of the ridiculous unattainability of our beauty standards. Yet most women still feel shitty about their bodies. We can’t solve the problem with awareness alone.

“You are beautiful. You are all so beautiful, and strong, and loving. You better tell yourself that every day, because you can’t count on anyone else in this world to do it for you”

That is what my kindergarten teacher would say to the entire class on multiple occasions. In doing so, she externally built our self-esteem but also conveyed how important it is for us to internally maintain it. Saying those words to the whole class also conveyed that there are infinite ways to be beautiful.

Having that kind of messaging from my kindergarten teacher, as well as many other adults in my life probably accounts for the vast majority of my positive body-image.  Adults in my life also placed high importance on inner-beauty: compassion, strength, joy, passion, etc. I was generally raised to be self-confident and have positive self-image.

I wish that I could attribute ALL of my body-positivity to internally-sourced self-love. I want to believe that I can internally defy all the ambient societal messaging. I want to be strong enough that I can derive a sense of self-beauty solely from within. Hey, maybe there are some people out there who can, but I, unfortunately, am not one of them. I need some external media validation. I know this sounds like a contradiction to Part 1 … but hear me out:

There is a big difference between believing XYZ and knowing that others (people outside your day-to-day life) believe XYZ as well. Think about some thought—some observation about humanity—that you once only half-believed. But then one day, someone else says the EXACT SAME THING that you were thinking in a blog post on the internet! Now, all of the sudden you know that XYZ is true, because someone completely outside your sphere of existence has stated it is true as well. That’s the power of external media validation.

It often just takes one hit to be effective.

Titan’s Venus with a Mirror

I loved Greek mythology as a kid, and by the time I hit puberty-when girls really start freaking out over body image- I knew that the Greeks and Romans and Renaissance folks must have thought this figure- my figure, was beautiful.

So instead of searching for inadequacies like “pot belly, pasty-white skin, stumpy thighs, and wide shoulders” I thought to myself, “Well, I may not look like the girls in the magazines, but that’s ok: because I look like a fucking Greek goddess!”

This is one of those wacky real-life benefits to exposing kids to other culture’s art. It might give them more ways to think about how they make their way through the world. Different culture’s art can remind us that at some point, somewhere in the world, a whole lot of people celebrate(d) “beauty” as something far different than the super-thin tan white women.

Take another example from a different culture:  I once knew an amazing, gorgeous, fat woman who kept a keychain of one of these: 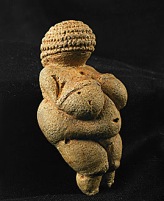 The Venus of Willendorf

These little statuettes, known as Venus Figurines were all the rage back in ~33,000 – 22,000 BC. Tons of them have been found all over Eurasia,  with various body-shapes but sharing many features such as big breasts, hands resting on top of the breasts, or just omitted entirely, big thighs, butt and belly. Here are some more examples: 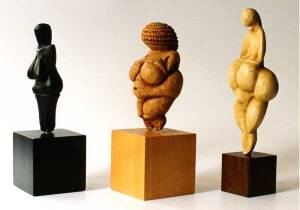 When I asked my friend what the keychain was, she said that it was a fertility goddesses, and that waaay back in the day, this was the epitome of beauty. I think its fair to say that this held a lot of significance for her.

External media validation is SO much more important to self-image than any of us want to believe. It’s also why seeing celebrities or other people in the media that defy at least some part of the typical beauty standards can be so powerful. Of course we need to have the foundations of  self-love, positivity and inner beauty in order to even have a chance at appreciating our own bodies, but external media validation can flip a switch in our brains such that we can feel secure. Just take it from Lupita:

This is why it is so important to celebrate different body types in the mainstream media. This is why people fight to bring Lupita, the Dove Real Beauty Campaign, and “average Barbie”, and Taryn Brumfett to center-stage. Because diversifying external media validation is invaluable.

Taryn Brumfitt is currently running a Kickstarter to fund Embrace- The Documentary, a global movement towards body-positivity.