consent, rape culture, use your words

EDITOR’S NOTE: Disrupting Dinner Parties is intended as a space where discussion, even disagreement, lead to a fuller understanding of issues. Like all our posts, this article represents the opinion of its author, not of “DDP” as a monolithic entity. In fact, this post generated heated discussion among the editors, which you can see in the comments section at the bottom of the page.

Long ago, when I first started dancing, my local scene was full of non-consensual touch*. Friends told me terrible stories of how they had been groped, grinded, ass-smacked, neck-nuzzled, or even licked non-consensually on the dance floor. I was shocked, but believed wholeheartedly. I had seen a fair share of these behaviors with my own two eyes; however, from outside the dance-partnership, I had no way of knowing whether it was consensual or not. 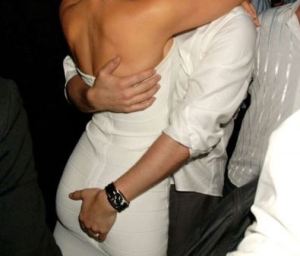 I can’t tell if she’s ok with that…

I had seen what happened when victims of sexual assault (non-consensual touch) followed the recommended protocol and came to the event organizer with the issue. The situation often turned into a matter of taking sides in a he-said-she-said debate. Sometimes the perpetrator was banned from the venue. But if they were popular, the entire community became divided and resentful.

I can understand why coming to the event organizer after-the-fact would be the recommended protocol. It means that there is some support for the victim, some added authority, and its unlikely to cause a scene. But from a young age, I was taught that my boundaries are of utmost importance. I have no problem causing a scene if it helps me assert and maintain my boundaries, and I wanted a plan for confronting a consent violation in the moment, without an authority’s help.

After pondering a myriad of tactics I finally decided upon immediate public shaming as the method most likely to be effective.

I decided that if someone touched me in a sexual, non-consensual way, I would first let them know, quietly but firmly, that they needed to stop, laying a clear boundary. If they violated that boundary a second time, I would shame the living shit out of them, loudly and publicly.

I decided that this SHAME technique would work best among a large group of people with shared history, friendship and a stake in maintaining that friendship, like the dance community. It would work particularly well for me, since I was relatively well-known and liked in the community, but I think it would work in general. It seemed that shame could be an incredibly useful tool to…

Yes! I had a plan. Armed with pre-meditated mental clarity, I would not be taken off-guard. I would not become paralyzed by the inherent disorientation of being physically-violated, or question the validity of my experience. I wouldn’t “just let it go” and perpetuate the idea that such acts were permissible, either. I would nip unacceptable behavior in the bud.

Years passed, but I never had to use my master plan. Then one night, at a friend’s 21st birthday party, Alex, an acquaintance/friend, slapped the birthday girl’s ass right in front of my face. She ignored it, which I interpreted as a sign that she did not appreciate it. I had little control over my outrage.

I realized that perhaps, she truly didn’t mind. I was meddling. I didn’t know the details of her relationship with Alex or with ass-slapping in general. But I was a little tipsy, and I needlessly continued to involve myself in the situation and said, “Ok, well just don’t do it to me.”

Oh dear lord. I shouldn’t have said anything. Really. I should have stayed out of the picture. But now I was here and the pre-meditated plan of SHAME took over.

The conversation dissolved, but about an hour later Alex found me and smacked my ass. “Here! Here!” he said, shoving his butt in my personal space “You can get me back”. I just looked back at him, livid. After laughing at me and sticking his ass in my face for a good long time, Alex got tired of teasing me and went to the bathroom.

The ass-smack really wasn’t that bad. (Sometimes I wonder if I would have followed through were I faced with a truly traumatizing consent violation). But I had told him I was going to humiliate him, and I had to follow through with my promise. I can’t have people thinking my words are meaningless.

I’m a small person, about 5’2”, but when Alex re-entered the main room, I was standing on the couch, towering about a head above him. I brought my face in close, my nose only an inch away from his, and began yelling at the top of my lungs:

As I was yelling him down, I suddenly realized why people don’t do this. Suddenly fears went through my head: holy crap, what if he gets really angry and hurts me physically, socially, sexually? But I couldn’t stop now. If I was going to do this I had to do it 100%.

I just kept yelling these lines repeatedly, until all attention focused on us and the party was completely silent. Finally, when I was absolutely certain I had everyone’s attention, I delivered the statement I wanted to be remembered most:

“I understand” Alex said, then grabbed his bag and left.

The party slowly resumed. A few people came up and asked me if I was alright. I said “yeah, I’m fine, really. I just need people to know that I mean what I say”. In truth, adrenaline was rushing through my body. And underneath the adrenaline, I felt kinda shitty. It doesn’t feel good to shame someone down like that. I was hurting someone, and it feels bad to hurt people. But I didn’t regret it for a moment. Making sure that people take me seriously and respect my boundaries is well worth feeling a little shitty.

When I got home Alex had de-friended me on facebook and sent me a “sorry” (not sorry) message that made it clear that he’d thought we were flirting the whole time.

I responded to make it clear that I want my words to be taken seriously, that I was mad at the behavior, not him personally. 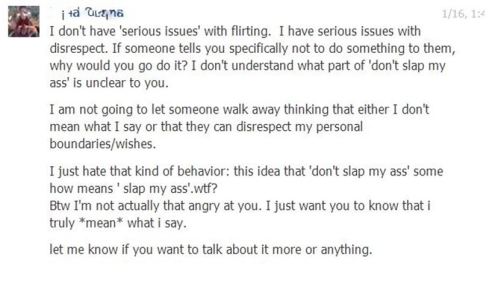 The following night I confronted him privately, outside the local dance venue. I explained that I wasn’t angry at him, but with his behavior of interpreting “no” as “yes”. I wanted to keep being friends with him, but with the understanding that I mean what I say. He said he understood, and apologized sincerely. I accepted. Then we hugged (seriously!) and went back inside.

In retrospect I can see why Alex thought we were flirting. There are some people who do flirt that way, but I’m obviously not one of them. Although my tone and body language had apparently indicated “serious” enough for Alex’s roommate to understand, somehow Alex still interpreted it as “flirtatious-joking”.

So if it was that ingrained, then how the hell else was Alex going to learn that “no means no”? If someone isn’t listening to my words to begin with, then “just letting it go” or even “coming back to it later” only reinforces the idea that my words don’t matter, that they can be ignored. Actions speak louder than words, and this immediate public humiliation was action.

Some of the effectiveness of the public humiliation came from its shock-value and defiance of stereotypes. No one expects a small white girl like myself to stand up so brazenly and cause a scene unless the issue is damned serious. Would it have worked if I was a black woman?  or would my actions be shrugged off as part of the “angry-black-woman” trope? I don’t really know…

Some of its effectiveness came from to my personal social privilege and popularity within this particular community. People knew me, trusted me, backed me. They knew Alex as well, but I was generally more well-known/popular.

However, most of the effectiveness of this method comes from the nature of shame itself. Public shaming might be uncomfortable, but it works. It’s far more powerful than guilt, “restorative justice” or punishment. Shame is often the sole force governing many social norms, some of which we don’t even think about.

As a great local stand-up comedian once said during a performance,

Sure, there are positive motivators as well: kindness, respect for other’s boundaries, desire for others to be happy and comfortable, or at least not distracted. You’d really like to believe that these are the reasons people behave appropriately, wouldn’t you? Well, sorry to burst your idealist-world bubble, but sometimes “common decency” type reasons just aren’t enough. Like when men feel entitled to do whatever they want with my body.

It’s just that us ladies are so used to being the recipients of shame that we forget its a tool we can use too. If Slut-shaming is a tool used to shame women for anything from dress-choices to engaging in any kind of sexual behavior, then Stud-shaming is a tool we can use as a line of self-defense or as an educational tool to discourage non-consensual sexual behavior.

Yes, its scary to shout a man down like that. In fact, determining whether its actually safe or not is a calculated risk that depends on the specifics of the situation. But hot-damn is it effective! Especially with some added follow-up discussion why the behavior is wrong.

For me, public shaming accomplished everything I had hoped: no one questioned the validity of my grievance, Alex actually learned from the experience, and everyone knew they better not ever mess with me…ever. Perhaps it even inspired some onlookers, who had previously only given lip service to the idea that “no means no”, to change their behavior as well.  Because nothing else stings quite like public shame.

* Things have gotten MUCH better since then: the dance community has made active efforts to combat non-consensual touch, and its working! That said, non-consensual touch still happens, and we will continue to confront it and strive for safer spaces.