There’s a hot new show on network television, and it’s a trailblazer. The Fox drama Empire- which follows the exploits of Lucious Lyon, his record label, and his family- is obliterating viewership records every single week. It is also stretching the minds of those viewers by taking a queer as fuck approach with its portrayals of sex and relationships in the Lyon family’s world.

The show has featured at least 4 central queer characters of color. AzMarie Livingston plays the role of Hakeem’s masculine-of-center bestie.  Hakeem and Camilla got us exploring the dynamics of a relationship with a significant age difference. Then there’s Andre and Rhonda, who are decidedly kinky and also have an open marriage.

All of this alternative-ness leaves me wanting more! So much so that sometimes, I’m disappointed when Empire doesn’t take advantage of an opportunity to further buck the hegemony, or show oppressed peoples thriving. But, a girl can dream. Here are some plot lines that I switched around in my head to make Empire even queer, inclusive, and representative of different types of relationships:

When Tiana was cool with Hakeem’s other girlfriend 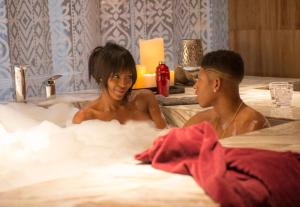 What happened: Young musical stars Hakeem and Tiana have a blossoming romantic relationship, and one that is very popular with their fanbase and the people in their lives. Hakeem’s dad Lucious invites Tiana over for dinner to formally introduce her to the family, and pre-teens across the country make websites declaring their love for the couple, known as ‘Takeem.’ END_OF_DOCUMENT_TOKEN_TO_BE_REPLACED