A lot of my feminist friends have reservations about watching Game of Thrones, because they’ve heard it’s misogynist. This makes me sad, because I think there’s a lot in this show for feminists to love. I definitely don’t think this show is for everyone. It has some disturbing representations of violence, including sexual violence, which can be triggering. For some people, it’s not just their cup of tea. But I’d like to try to convince some women that they might want to consider watching this show, and tell them what they might get out of it.

(I’m restricting myself to discussion of the show rather than the book series, even though I enjoy both, simply because most people don’t have the time or energy to read thousands upon thousands of pages of epic fantasy, and that’s OK.)

First, I’d like to take a moment to point out what is most problematic about the show, because all shows have troubling aspects, and just because I love a show doesn’t mean I can’t call it out on its bullshit. The show is famously drenched in the male gaze; that is, the creators assume the viewer is a man who wants to see naked women represented as sexual objects. Most unsettlingly, the male gaze sometimes applies during scenes depicting sexual violence. I don’t think there’s anything necessarily wrong with depicting sexual violence on screen, but the camera definitely should not be leering at women who are sexually assaulted.

Any spoilers below the cut will be clearly marked, so read on without fear. 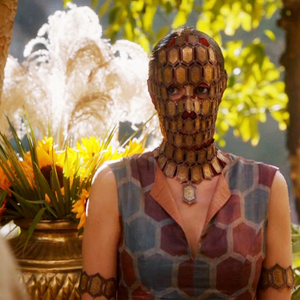 All women of color dress like Lady Gaga, amirite?