So, I saw this quoted on facebook, in reference to the Steubenville rapists. 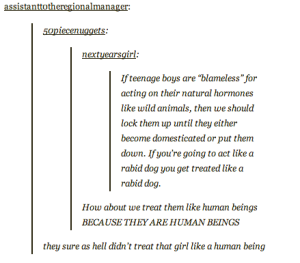 END_OF_DOCUMENT_TOKEN_TO_BE_REPLACED

[This is a follow-up piece to the article I posted yesterday reacting to the media coverage of the Steubenville rape case. I had some more thoughts that I wanted to clarify and expand on, because I feel very strongly that they are important.]

There is now a Change.org petition responding to CNN’s coverage, but I am uncomfortable with the wording. Specifically, the part where they describe the two rapists as “vicious and cruel criminals.” Not because the label is inaccurate, but because it implied that these boys were somehow “bad apples,” inherently corrupt and unlike decent human beings. That’s letting ourselves off the hook.

To be clear – I am not condoning or excusing or apologizing for the actions of the Steubenville rapists. What these boys did was vicious, and cruel, and a crime. They raped a girl, repeatedly. They demonstrated a horrifying lack of empathy, compassion, and common decency. And they should be punished, severely, for their actions.

But describing them as inherently, abnormally evil is letting the rest of us off the hook – because when they assaulted their victim, they weren’t acting outside the bounds of the society they had been raised in. That WE had raised them in.

They were acting out the truths they had been taught, by every media company, by churches, by courts of law, by their peers.

The truth that women’s bodies belong to men, that they are sexual objects who exist for men’s pleasure and consumption. That “real men” take what they want, especially when it comes to women’s bodies. That it’s not rape unless the woman is screaming “no” and fighting hard enough to have blood under her fingernails.

END_OF_DOCUMENT_TOKEN_TO_BE_REPLACED

I am so fucking sick of rape apologists.

The two teens accused of sexually assaulting an incapacitated girl in Steubenville, Ohio were found guilty yesterday in a juvenile court. They were sentenced to one year and two years, respectively, in juvenile detention. CNN’s coverage of the event focused exclusively on how difficult this verdict was for those poor boys:

For those of you who don’t care to watch, the Raw Story provides quotes along with extremely justified disgust.

For those of you who don’t care to click on links, here’s a choice quote from CNN’s Paul Callan:

There’s always that moment of just — lives are destroyed,” Callan remarked. “But in terms of what happens now, the most severe thing with these young men is being labeled as registered sex offenders. That label is now placed on them by Ohio law.”

“That will haunt them for the rest of their lives.